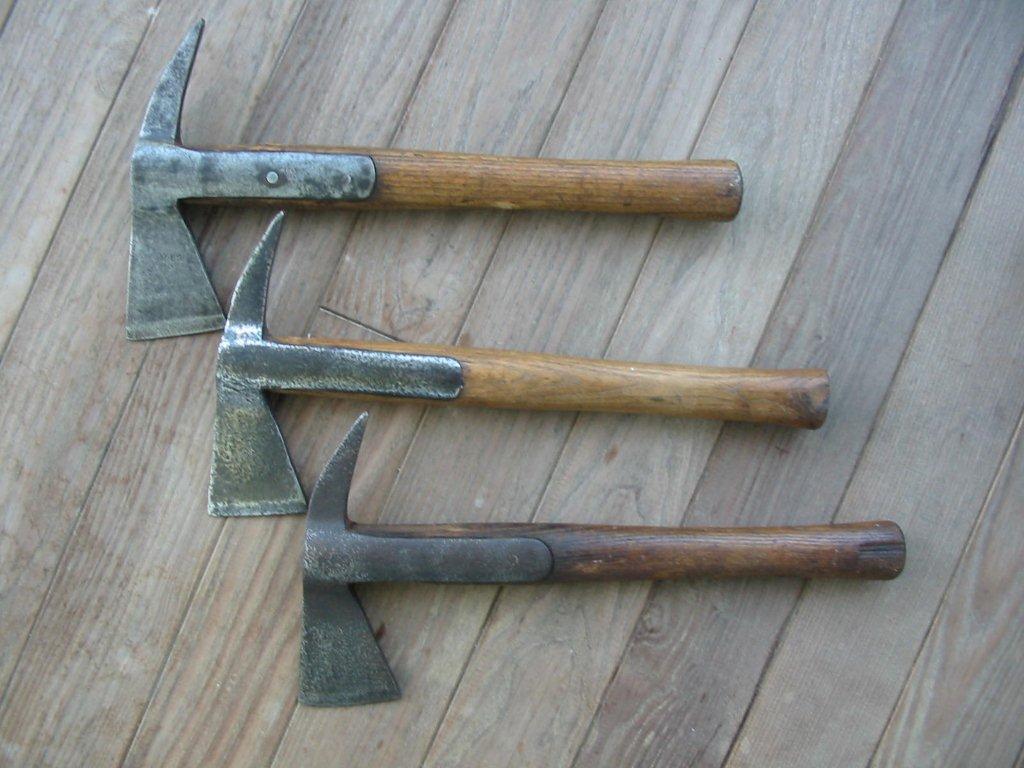 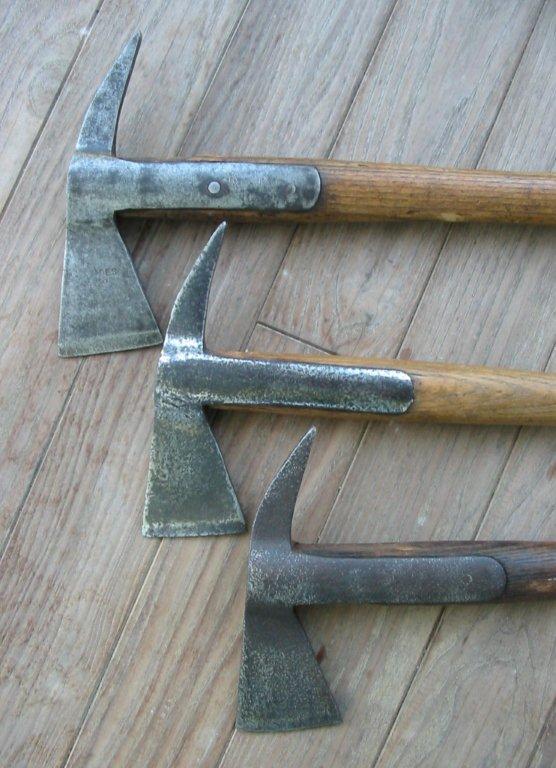 Original English Boarding Axes   Axes of the type used by the British Navy.  All have approximately approximately 2 3/4 inch by 7 1/2 inch head with 14 3/4 inch handle.

Hunting Sword with Double Edge Blade   Solid grip with brass hardware. The wrapped copper wire on the grip has probably been recently rewrapped, but it is professionally done and tight.  The slightly pitted, 23 1/4" inch blade still shows a fair amount of the original engraving.  29 inches overall.  A nice, solid sword for carry or display.  $600 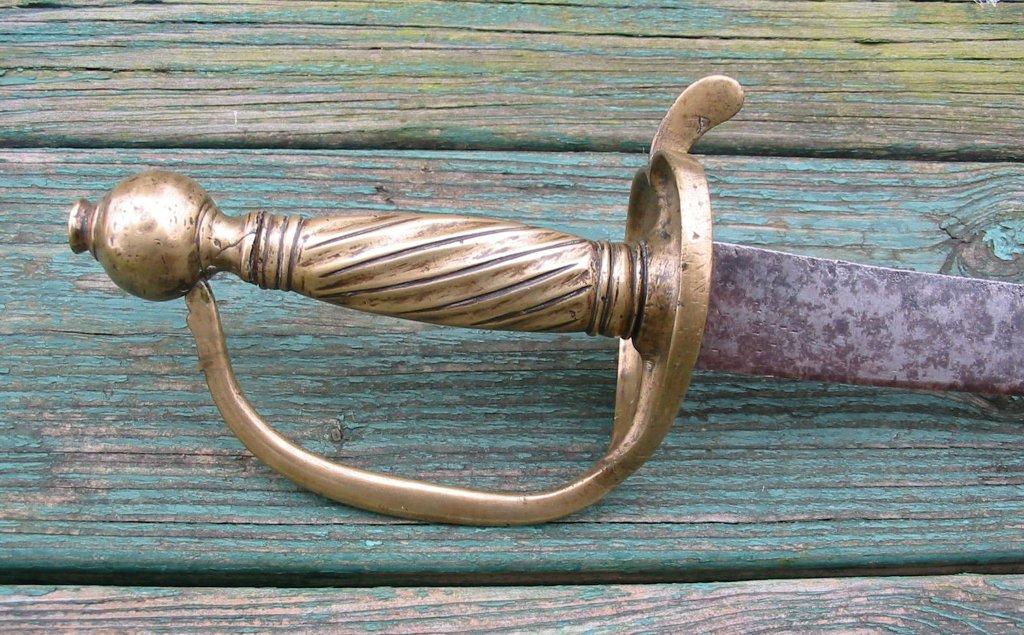 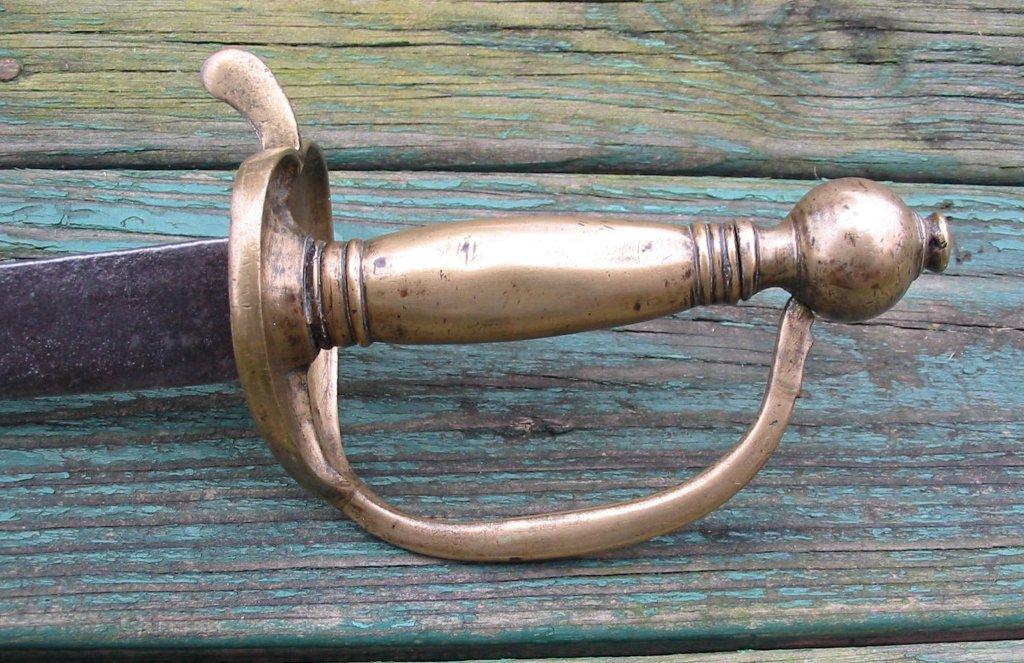 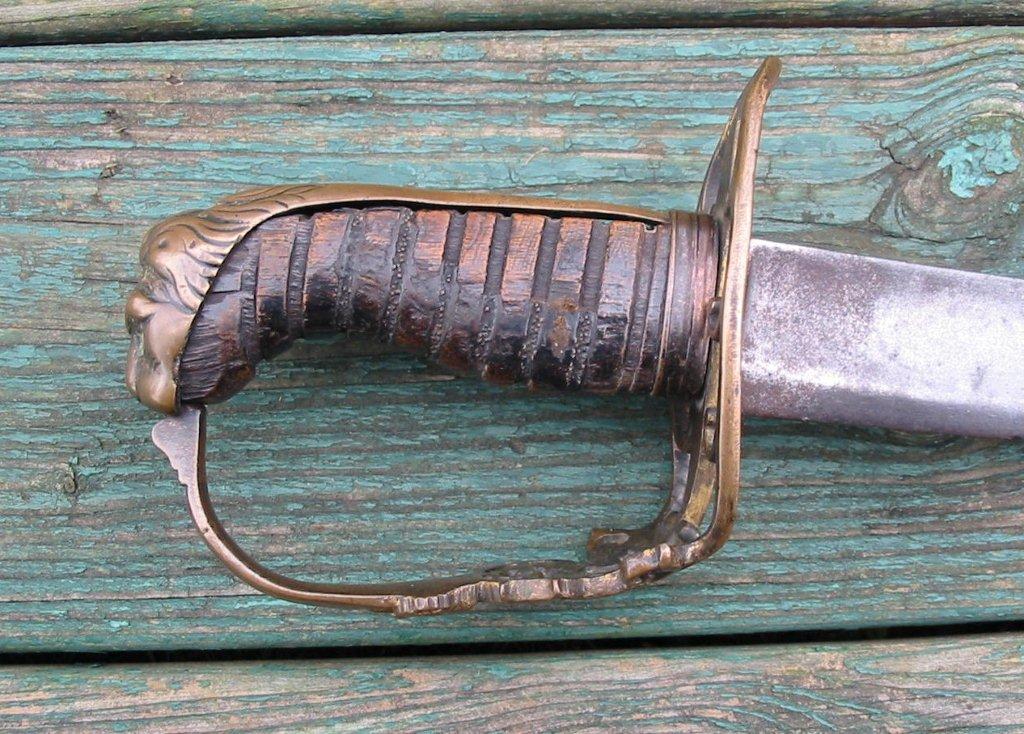 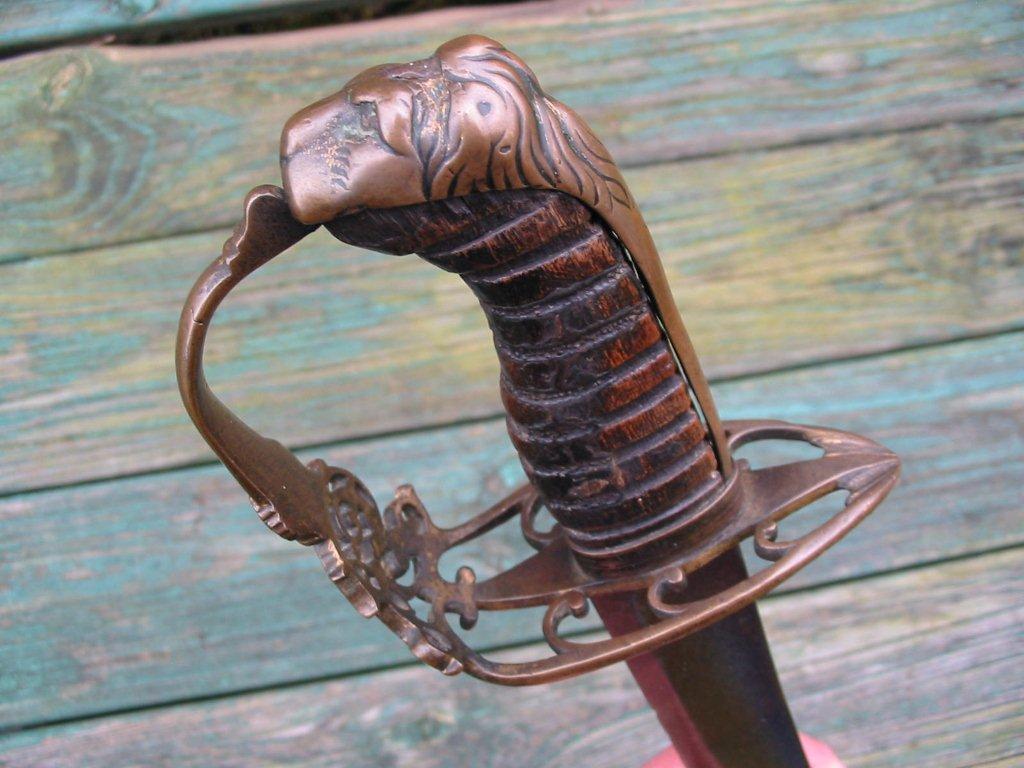 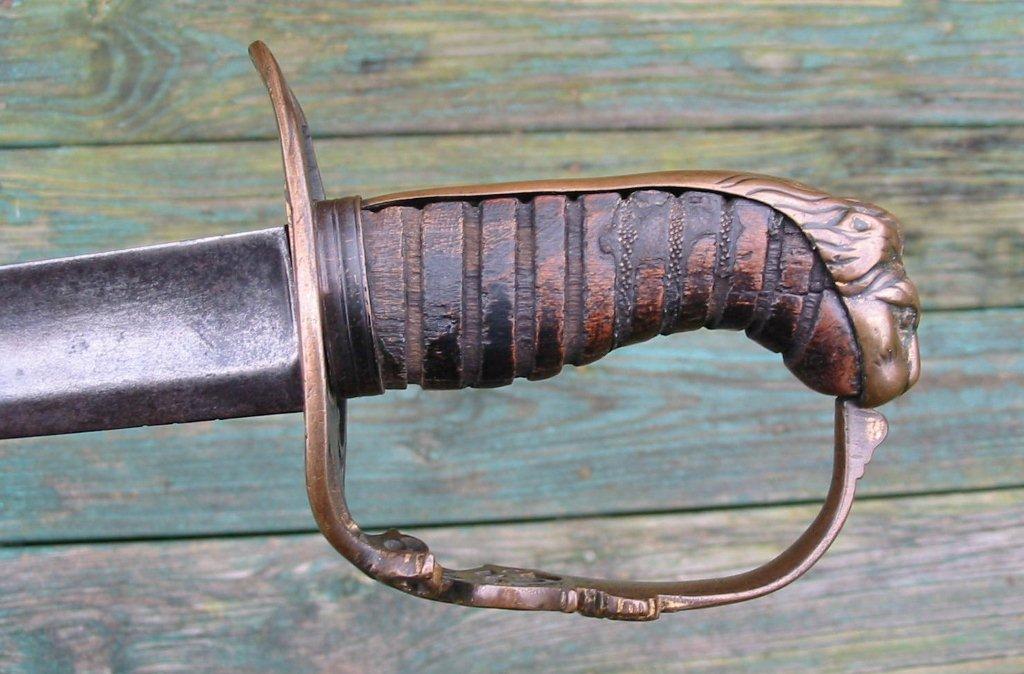 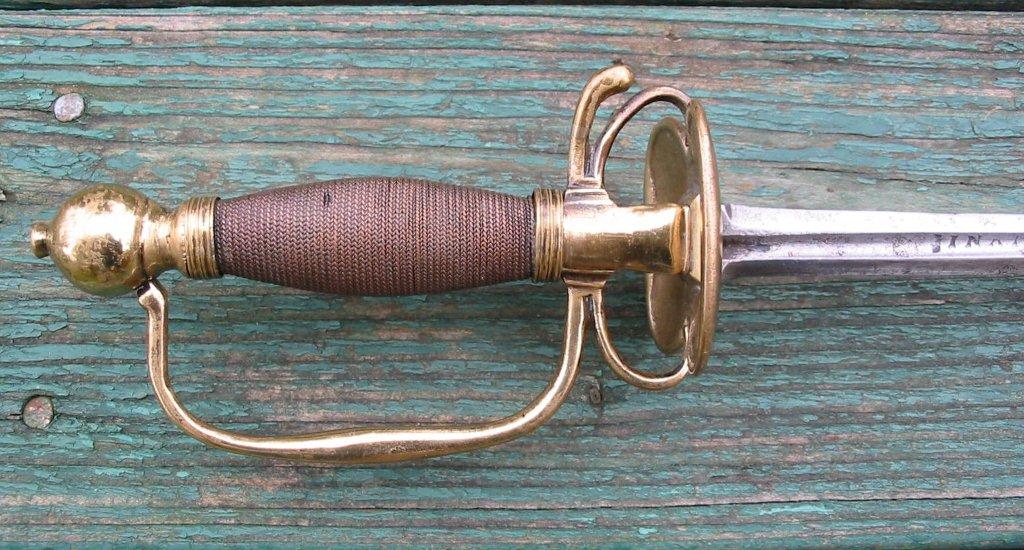 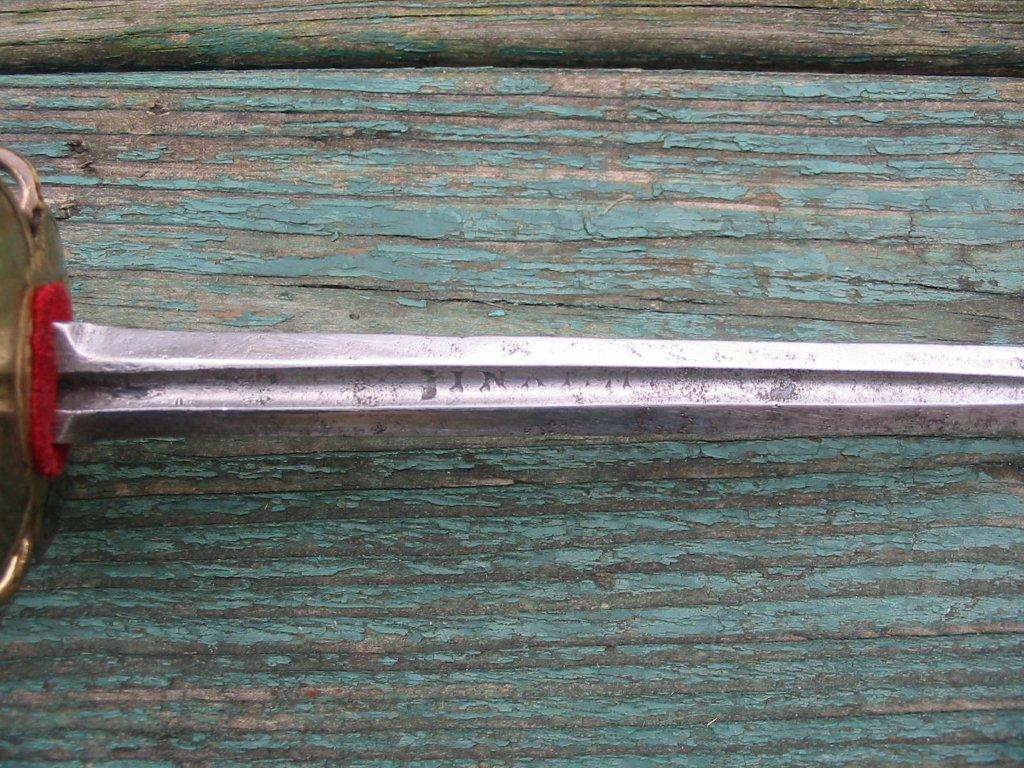 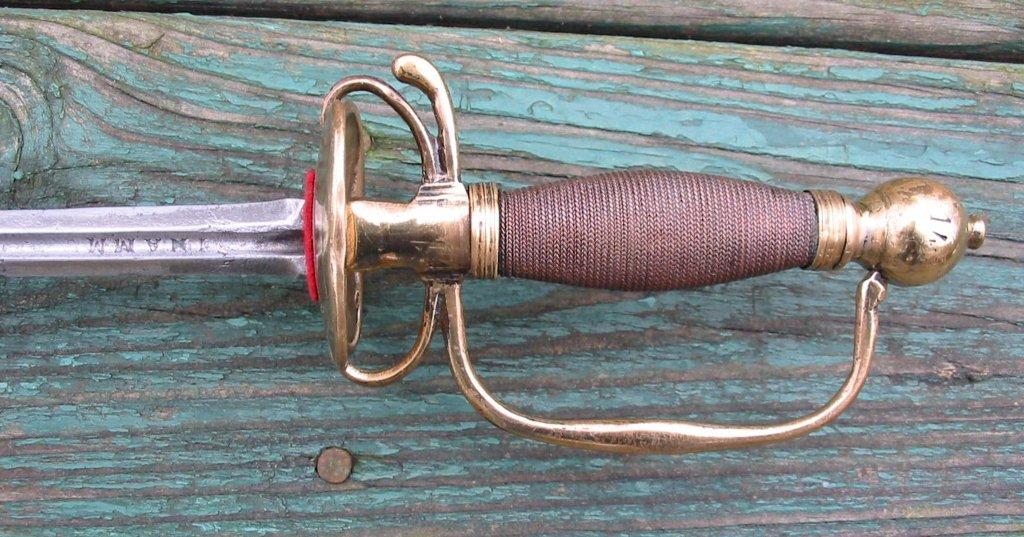 Young Gentleman's or Musician's Smallsword   Diminutive sized smallsword of the type often seen worn by well-to-do male children in portraits from the period.   Straight, 27 1/4 inch rapier blade with single, middle fuller, marked "INAMM" on both sides.  Gilded guard with wire wrapped grip.  Pommel has the number "14" stamped on the side, which may indicate this was an "issued" weapon such as young musicians might have worn.  $675 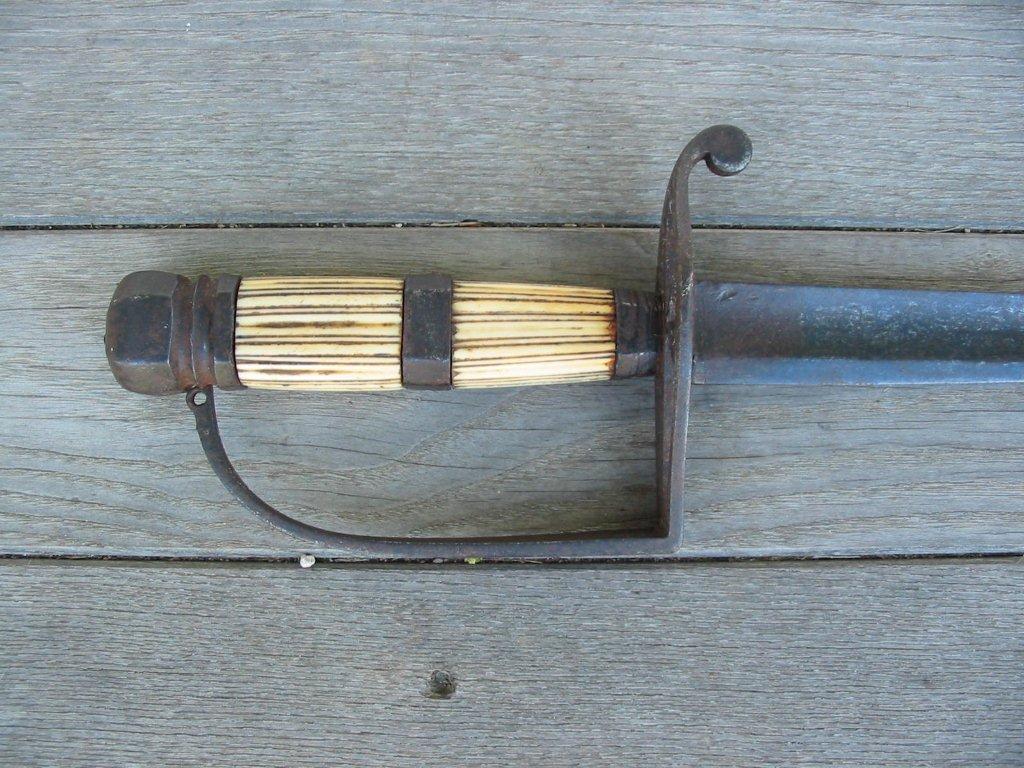 Original late 18th Century Officer's Spadroon  This very attractive sword features a bone grip in the cigar band style with iron guard and hardware.  The straight, 23 inch blade has likely been cut-down at some point to more of a hanger length.  It has a single, wide fuller and rich patina with some visible engraving remaining.  The guard has some play.  Overall, a nice sword that would look great in a display.  SOLD 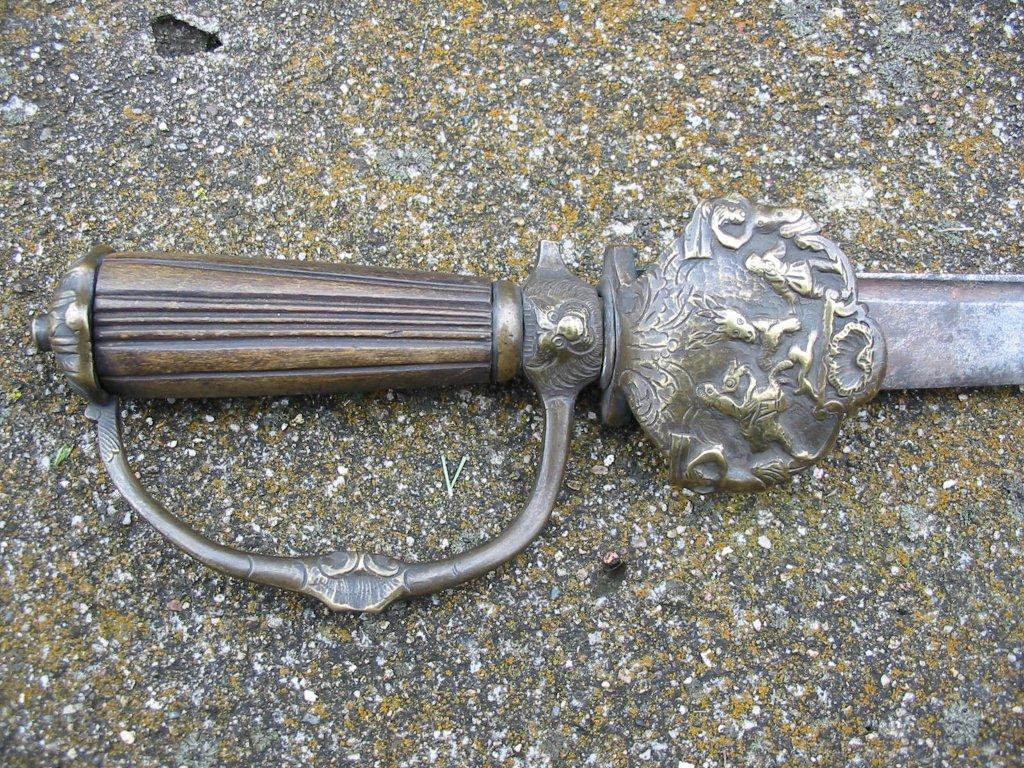 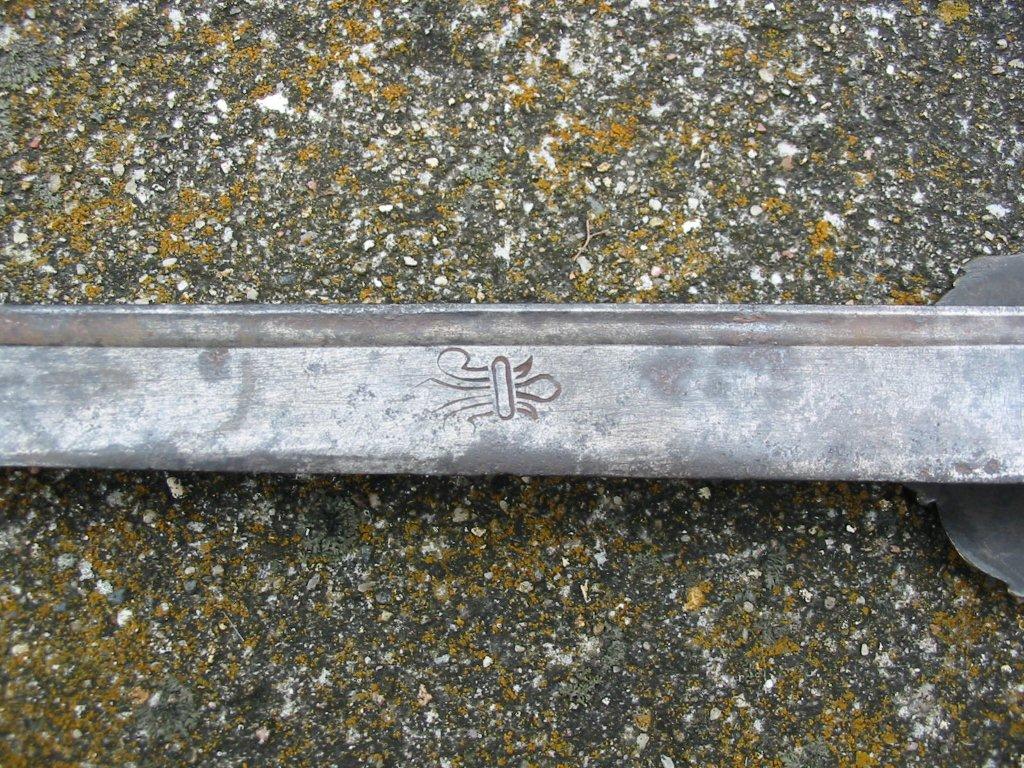 French Hunting Sword.  Nice circa 1750 hunting sword with fluted horn grip, brass guard and shell.  The straight 22 1/2 inch blade has a single back fuller and fleur-de-lis markings. Good patina, blade has some pitting and the quillion is missing from the guard.  $800 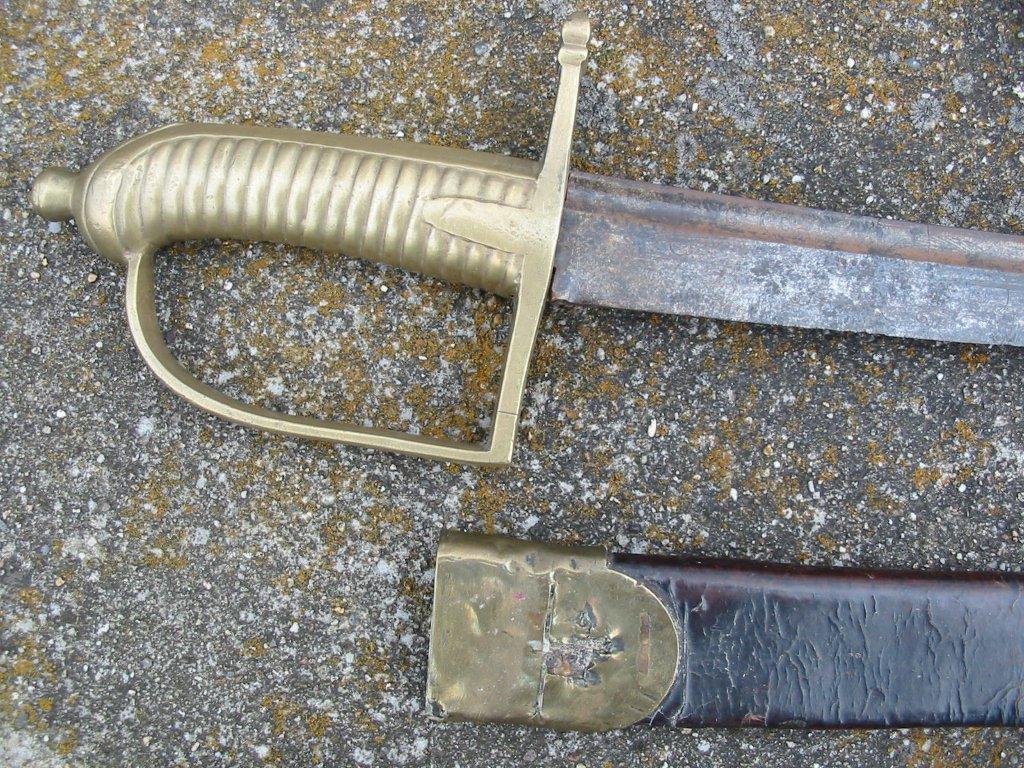 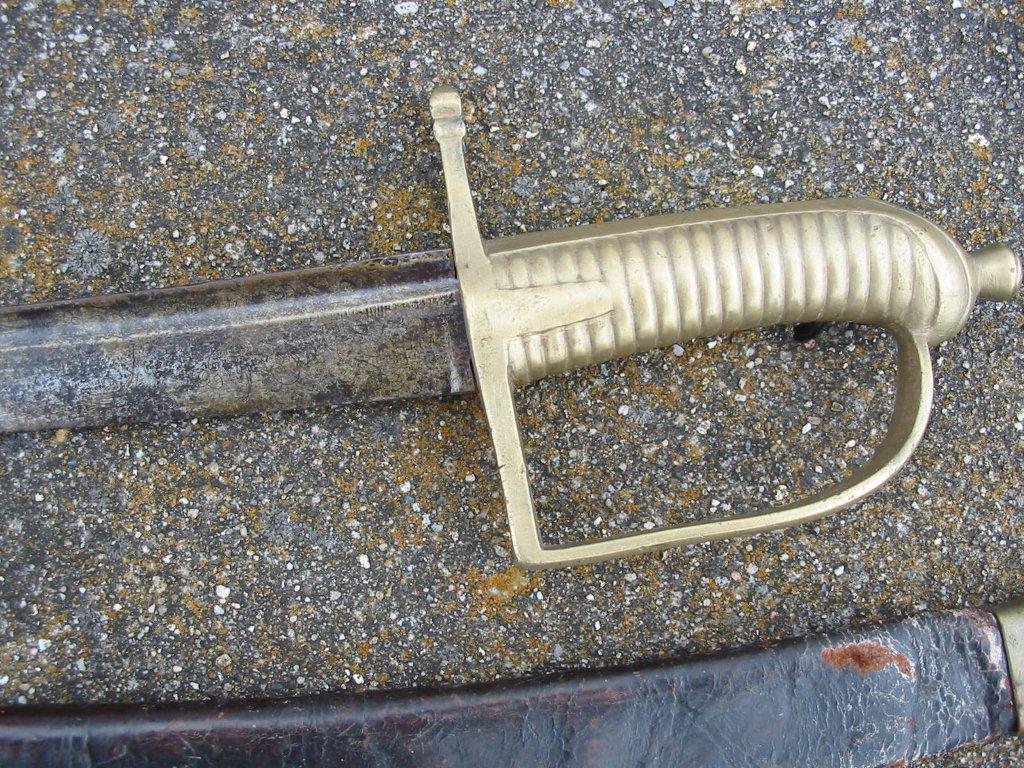 Original Model "1767" French Hanger #1.  Seen in several variations, this standard French hanger was used by both French and American soldiers during the American Revolution and in the years following.  The 22 3/4 inch, typical hanger-style blade has a single, back fuller and is of a weight and quality that one would expect to see on an 18th century hanger.  Guard is of the later, one-piece type, which may indicate an earlier blade that was retrofitted at some point during it's use. This sword is complete, with it's original, leather scabbard and hardware.  Overall fair condition; the blade is dark with some pitting and guard is mounted at a bit of an angle, but is otherwise solid and tight.  $650

Original Model "1767" French Hanger #2.   Similar to the hanger above, This sword carries a 25 inch, typically thin, hanger-style blade with a single, back fuller.  Guard is of the one-piece type.  Another rare sword in that it also has it's original, wood-lined, leather scabbard with brass hardware.  Condition is good with some deeper pitting and darker areas on the blade.  Grip is tight and solid.  SOLD

Early Style Practice Smallswords.  Though the hilts are in the popular style of the late 18th century, this pair of fencing or practice swords was most likely made during the 19th century.  The epee blades are 34 1/2 inches long and have a blunted "nail" point.  The hilts appear to be brass.  These smallswords would work well for display, theater props, or as part of a traditional fencing presentation.   SOLD

OTHER ITEMS FROM THE FORGE